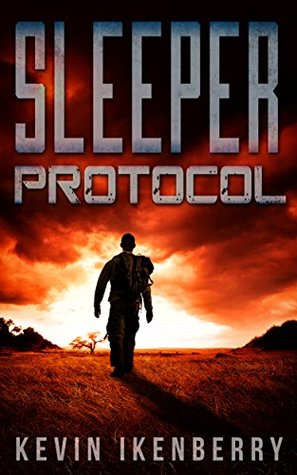 Kieran Roark awakens in a wheelchair, unable to remember anything. As part of a classified experiment, he will have one year to learn his identity and recover his memory, or he will be euthanized by the state.

Scientist Berkeley Bennett has one mission: manipulate Kieran’s emotions in an attempt to bring back his memory. But when she falls in love with him, she is forced to make a harrowing decision that may cost Kieran his life.

What Kieran knows could save Earth from a coming war. Whether he believes the future is worth saving is another matter. Racing across an unfamiliar world in a body he does not recall, Kieran needs to discover who he was and, more importantly, who he is.

Kindle Edition, 305 pages
Published January 5th 2016 by Red Adept Publishing, LLC
Genre: Military Science Fiction, War Fiction, Time Travel, Romance
Goodreads
What’s It About?
Imagine waking up as a patient in a wheelchair, not knowing as much as your own name… Imagine looking upward, to an alien sky and flying cars. Then, imagine being told you’re being released and that you have to put your memory back together – if you don’t, you will be euthanized by the State.
Dropped into the outback to survive on his own, the subject has random recollections of his life before he wound up in the hospital. Most of his memories are from the Middle East, where he believes he may have been a soldier fighting in Afghanistan. He is tracked throughout his “walkabout” and is in constant contact with a “guidance protocol”. He studies his new world as he tries to make sense of who and what he was and eventually he concludes that he’s been woken for a purpose that no one else seems capable of doing.

While science fiction isn’t my favorite genre, I can appreciate good writing. This story exceeded my expectations. I loved the crossover between military fiction and science fiction. The results of this crossover was non-stop action! Truly, there was never a dull moment in Sleeper Protocol.

I absolutely loved the subject’s “mother hen” guidance protocol, Mally! Although not a real person, Mally was my favorite character. She became more and more possessive of the subject as the story progressed – convinced that the destruction of her subject meant her demise. I particularly liked when she was mad at him for hanging out with Chastity the prostitute. I think she was jealous!

There were so many unpredictable twists and turns in this novel, making it a page turner. Trust me, you won’t see the ending coming. The world building was incredible, giving the reader a great picture of time and place. I also want to mention that the cover of this novel is perfect, considering the “walkabout”. StreetLight Graphics absolutely captured the concept of this story on the cover of the book.

I would recommend this fast-paced novel to fans of military science fiction. 🙂

In the interest of full disclosure, I received and e-copy of this novel from the author in exchange for a fair, honest, and thoughtful book review. This in no way swayed my opinion nor rating.

Kevin’s head has been in the clouds since he was old enough to read. Ask him and he’ll tell you that he still wants to be an astronaut. Kevin has a diverse background in space and space science education. A former manager of the world-renowned U.S. Space Camp program in Huntsville, Alabama and a former executive of two Challenger Learning Centers, Kevin continues to work with space every day. Kevin lives in Colorado with his family.
Kevin is a member of Fiction Foundry, Pikes Peak Writers, the Horror Society, and the Colorado Springs Fiction Writers Group. His short fiction has appeared twice on the webzine Mindflights and in print with Andromeda Spaceways Inflight Magazine Issue #56, and Twisted Dreams Magazine. His story “Maelstrom” appears in the Extreme Planets anthology forthcoming from Chaosium. His now self-published novelette “Ascent” won an Honorable Mention in the 4th Quarter 2011 Writers Of The Future Contest.
Kevin’s debut science fiction novel, SLEEPER PROTOCOL, will appear from Red Adept Publishing in late 2015.
The Official Site of Kevin Ikenberry