When Jacob’s mentor, Father Stephen Brentwood, the man for whom he joined the priesthood, is killed, he realizes he is embroiled in a plot far more sacrilegious than he originally thought.

As he uncovers the mystery of Stephen’s past, he discovers that of his own. The scheme of his mentor’s death pulls him deeper into the church, and brings him closer to the elusive figure at the head of the Trinity. Once Jacob’s role in their machinations is revealed, one for which he is unknowingly destined to play, it is too late for him to disentangle his truth from their heresy.

As usual, Author K.P. Ambroziak has blown me away with her amazing writing skills!

The Trinity is a story about a church with an unbelievable, tangled weave of secrets, that leads to a murder of one of their own. I was HOOKED the moment when the young woman, (Rebecca), burst into the church and demanded to see Father Stephen Brentwood. I wondered what their connection could be and I was eager to read more.

I loved the conspiratorial elements of The Trinity, from the Bishops keeping secrets, the painting of the Garden of Eden depicting Eve with two men, (was one possibly Satan?), to the article of faith called the dual seed. This novel challenged my thoughts and really made me think.

“Evil can’t come from God, so it must have come from Satan as far back as the Garden… Evil came into the world alongside good.”

The unpredictable twists and turns had my head spinning around in different directions. Everyone was exchanging roles and nobody was as they seemed. I found myself flipping through my notes of the book to reread passages I wrote down so I could keep up with all the action! This is a book I definitely need to read again to see if I missed any small clues that were peppered in by the Author. I love a good mystery, and The Trinity was a GREAT mystery!

I would recommend this novel to fans of mystery and suspense with religious overtones.

In the interest of full disclosure, I received an e-copy of The Trinity in exchange for a thoughtful, honest, and fair book review. This in no way swayed my opinion. 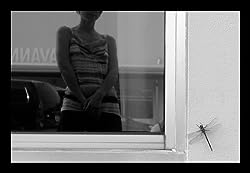 K. P. Ambroziak has a Ph.D. in Comparative Literature with a concentration in English Renaissance drama and art. Her research relies on early Christian writings, ancient philosophy, natural religion, Greek and Roman mythology, as well as the medieval church. She is interested in how religion impacts humanistic study, and her work often includes research on visual art. Most recently, for example, her article “Poussin’s Echo of Ovid” was published in WRECK: Graduate Journal of Art History, Visual Art & Theory.

She writes fiction as well, and is currently working on her fifth novel.