“What if you met the man of your dreams… And found out he was living a lie?”

Author Jennifer Allis Provost has broken out of her usual role as a fantasy author, and written Changing Teams, a contemporary romance with a twist! And in true Jenn AP fashion, this isn’t your sappy, lovey-dovey romance, oh no… This one is dark and gritty, and it will leave you absolutely speechless! How do I know this, you might be wondering? Well, as a perk of being her good friend, I get to read her books before anyone else does! 🙂

So without further ado, here is the book cover for Changing Teams!

I just love this gorgeous cover by Wicked By Design! The NYC skyline, and the couple kissing portray this book accurately and with class! This is a book I would be proud to have on my bookshelf! I will have to add it to my Jennifer Allis Provost collection of books!

Add to your TBR Shelf on Goodreads 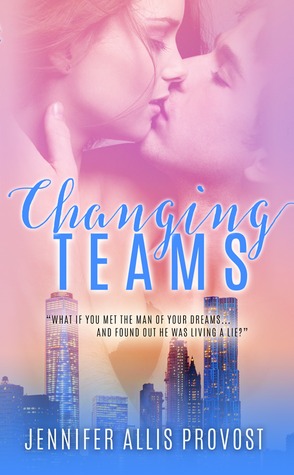 Taking lame jobs just to make ends meet is leading Britt nowhere, and she knows something has to change. She needs some excitement, and when she meets blue-eyed Midwesterner Sam MacKellar at a photo shoot, she realizes he’s perfect for her in every way—well, except for the fact he’s gay.

Sam came to New York City to escape an existence that had become unbearable, and when his job as a photographer’s assistant leads him to Britt, he realizes he’s finally met someone who sees him as he really is. But plagued by nightmares and trapped by his own deception, he doesn’t know how she can truly be part of his life.

Friendship leads to a passionate encounter and hidden dangers…

Britt comforts Sam though his nightmares, and they begin to explore their mutual attraction, but the tables are turned when Britt faces unwelcome attention from a manipulative art instructor and Sam must come to her defense.

Sam is terrified to reveal the source of his nightmares, sure the truth would shatter his complicated relationship with Britt, but when she suffers an unspeakable trauma of her own, only Sam can help her pick up the pieces.

When Britt learns the magnitude of Sam’s lies, will his reasons and the depth of their feelings be enough to allow her to forgive him? Does she have a future with Sam, or does his deception also include the reality of changing teams?

Jennifer Allis Provost writes books about faeries, orcs and elves. Zombies too. She grew up in the wilds of Western Massachusetts and had read every book in the local library by age twelve. (It was a small library). An early love of mythology and folklore led to her epic fantasy series, The Chronicles of Parthalan, and her day job as a cubicle monkey helped shape her urban fantasy, Copper Girl. Her latest release, Heir to the Sun, launched June 1, 2015. Changing Teams, the first in a new contemporary series, will release November 10, 2015 from Limitless Publishing.