Things are never quite as they appear.

Bethan Brooks works in London for the ultimate boss from Hell, trying to support her wannabe rockstar boyfriend. But are The Vampire Squirrels really ever going to make it big or is she doomed to be a secretary forever? Luckily, Bethan finds the perfect escape when going to the cinema. There she loses herself in another world and forgets all about the dreaded filing and monotonous office work. Imagine her surprise when one day she encounters her favourite actor on the Tube. Suddenly, she finds herself part of the glamorous movie world she only ever dreamed about. With more at stake than she could ever realise, does she really want to know what goes on behind the scenes?

Bethan Brooks is working a monotonous office job to support herself and her unemployed, musician boyfriend, while daydreaming about the glitz and glam of working in the movie industry. One day, she runs into her favorite movie star, Vincent Constantine, and after bumping into him a second time, he invites her on the set.

“What happens on set, stays on set.”

She helps out on set, and makes quite the impression. She just might have a real future in the film industry!

Unfortunately, not everyone is happy about Bethan’s future, including her own boyfriend, and someone is out to sabotage her, someone she would never suspect…

Bethan bounces back, but what she isn’t aware of is what’s going on behind the scenes, both in her love life and career. Her life is becoming like one of the movies she watches on the big screen!

My favorite character was Bethan. She came off as real to me, and I really liked her personality. I never liked her boyfriend Lee because he was unsupportive of her dreams and aspirations, (despite him living in a fantasy world himself). I didn’t feel that they were a good match, (which I’m sure was intentional by the Author).

Behind The Scenes was rather predictable. I saw the big reveal coming from a mile away. The author left little clues throughout the story that made me want to scream to Bethan, “Hellllllo! Can’t you see who “Mongoose” is!?” I mean, is anyone really THAT clueless? I will chock that up to Bethan’s trusting nature, and her head being up in the clouds due to being really excited to work in the movies. (The author did allude to Bethan’s naivety in the beginning of the

novel, when she wasn’t able to discern a sarcastic joke.)

Behind The Scenes focuses more on career than love, but there is some romance in this novel to round everything
out. I found the plot to be believable, and I couldn’t have asked for a better ending for Bethan. All around, a good read!

British-English Chick Lit novels always put me in a good mood, and for that, I am grateful to the author. I would recommend this novel to others who enjoy chick lit novels, that are set in London. There is something so magical about that setting, and I really enjoy novels that take place in this city!

Oh, and word of advice, take it from Bethan, always wear sensible shoes on the set! 🙂

***I received an e-copy of Behind The Scenes by So Vain Books Inc., in exchange for a fair, honest, and thoughtful book review. This in no way swayed my opinion or rating. 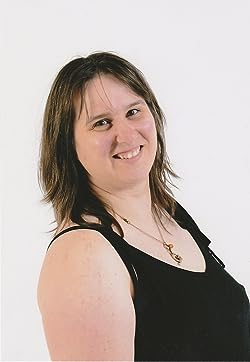 Sophie Childs is an author, freelance writer and happily married mother of five. Her claims to fame include hosting an open mic night with Ewan McGregor in the audience and winning both The Weakest Link and The Chase. After spending five years living in New Zealand, she’s now comfortably settled in the beautiful Welsh valleys and when she’s not running around after her children, puppy and chickens, she writes and writes and writes. Her first novel, Behind the Scenes, was published by So Vain Books in February 2015 and she’s currently hard at work on her second, due out early in 2016.–Amazon Author BIO