Way Back Wednesday is a Book Meme created by A Well Read Woman with the aim to write mini book reviews on books read in the past, that left a lasting impression. You know what kind of books I am talking about… The ones that you have read multiple times, and they still bring you nostalgia. Books like these are the reason you enjoy reading.

So grab that old-dusty-yet-loved-book off the shelf, glance it over, write a mini review, and join in with me on Wednesdays! EVERYONE is welcome to participate. Full rules can be found, here!

This week I am taking it waaay back, by featuring one of my favorite children’s books from the 80’s. Please join me on this little trip down memory lane! 🙂

“Fans young and old will laugh out loud at the irrepressible wit of Peter Hatcher, the hilarious antics of mischievous Fudge, and the unbreakable confidence of know-it-all Sheila Tubman in Judy Blume’s five Fudge books. Brand-new covers adorn these perennial favorites, and will entice a whole new generation of Fudge—and Judy Blume—fans.”

My second grade teacher set aside time everyday to read us Superfudge. I can remember sitting cross-legged on the floor, with the rest of the kids, as she read from the pages of this book.

Superfudge is an adorable tale about a little boy named Peter, who is concerned that the baby-to-be, will be a carbon copy of his obnoxious, mischievous little brother, Fudge.

Meanwhile, Fudge is upset, because he enjoys being the baby of the family. The addition of his little sister is really cramping Fudge’s style! BTW, the little sister’s name is Tootsie. 🙂

Later when I read this book on my own, I found some passages that my second grade teacher must have skipped over. There was a lot of name calling, and the subject of Santa Claus came up… So, DO NOT allow your child to read this book if they aren’t aware that Santa Claus isn’t real!!

Overall, I would classify Superfudge as a humorous Middle Grade novel, that is well deserving of 5 stars. 🙂 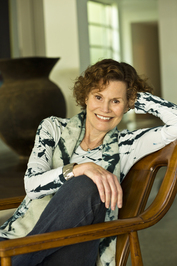 Judy Blume spent her childhood in Elizabeth, New Jersey, making up stories inside her head. She has spent her adult years in many places doing the same thing, only now she writes her stories down on paper. Adults as well as children will recognize such Blume titles as: Are You There God? It’s Me, Margaret; Blubber; Just as Long as We’re Together; and the five book series about the irrepressible Fudge. She has also written three novels for adults, Summer Sisters; Smart Women; and Wifey, all of them New York Times bestsellers. More than 80 million copies of her books have been sold, and her work has been translated into thirty-one languages. She receives thousands of letters a year from readers of all ages who share their feelings and concerns with her.
Judy received a B.S. in education from New York University in 1961, which named her a Distinguished Alumna in 1996, the same year the American Library Association honored her with the Margaret A. Edwards Award for Lifetime Achievement. Other recognitions include the Library of Congress Living Legends Award and the 2004 National Book Foundation’s Medal for Distinguished Contribution to American Letters.
She is the founder and trustee of The Kids Fund, a charitable and educational foundation. She serves on the boards of the Author’s Guild; the Society of Children’s Book Writers and Illustrators; the Key West Literary Seminar; and the National Coalition Against Censorship.
Judy is a longtime advocate of intellectual freedom. Finding herself at the center of an organized book banning campaign in the 1980’s she began to reach out to other writers, as well as teachers and librarians, who were under fire. Since then, she has worked tirelessly with the National Coalition Against Censorship to protect the freedom to read. She is the editor of Places I Never Meant To Be, Original Stories by Censored Writers.
Judy has completed a series of four chapter books — The Pain & the Great One — illustrated by New Yorker cartoonist James Stevenson. She has co-written and produced a film adaptation of her book Tiger Eyes, and is currently writing a new novel.
Judy and her husband George Cooper live on islands up and down the east coast. They have three grown children and one grandchild.
—Goodreads Author Bio