A revelatory look inside the world’s most dangerous terrorist group… 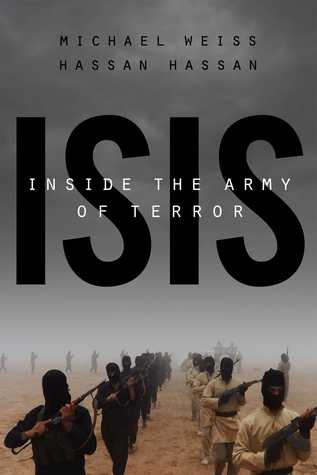 Initially dismissed by US President Barack Obama, along with other fledgling terrorist groups, as a “jayvee squad” compared to al-Qaeda, the Islamic State of Iraq and Syria (ISIS) has shocked the world by conquering massive territories in both countries and promising to create a vast new Muslim caliphate that observes the strict dictates of Sharia law.

In ISIS: Inside the Army of Terror, American journalist Michael Weiss and Syrian analyst Hassan Hassan explain how these violent extremists evolved from a nearly defeated Iraqi insurgent group into a jihadi army of international volunteers who behead Western hostages in slickly produced videos and have conquered territory equal to the size of Great Britain. Beginning with the early days of Abu Musab al-Zarqawi, the founder of ISIS’s first incarnation as “al-Qaeda in Iraq,” Weiss and Hassan explain who the key players are—from their elusive leader Abu Bakr al-Baghdadi to the former Saddam Baathists in their ranks—where they come from, how the movement has attracted both local and global support, and where their financing comes from.

Political and military maneuvering by the United States, Iraq, Iran, and Syria have all fueled ISIS’s astonishing and explosive expansion. Drawing on original interviews with former US military officials and current ISIS fighters, the authors also reveal the internecine struggles within the movement itself, as well as ISIS’s bloody hatred of Shiite Muslims, which is generating another sectarian war in the region. Just like the one the US thought it had stopped in 2011 in Iraq. Past is prologue and America’s legacy in the Middle East is sowing a new generation of terror.

Paperback, 288 pages
Published February 17th 2015 by Regan Arts. (first published January 29th 2015)
Genre: Non-Fiction, Politics, War-Terrorism, History, Political Science, Religion
Add to Goodreads TBR Hello readers! My name is Ben, and my wife kindly gave me space on her blog today. Today I will be discussing Isis: Inside The Army of Terror, and my thoughts on this book. I have a strong interest in middle-eastern studies, and I found this book to be extremely educating.

ISIS Inside The Army Of Terror, by Authors Michael Weiss, and Hassan Hassan, offers a unique glimpse into the most organized and brutal terrorist group to date.  This book offers an unbiased view about the evolution of these violent extremists, who have hijacked the Islamic religion.

ISIS rose from the ashes of a nearly defeated al-Qaeda in Iraq, in the wake of the precipitous withdrawal of U.S. forces from Iraq in 2011. The rise of ISIS resulted from many factors, but not so much as the grievances of Sunni Muslims.

ISIS: Inside The Army Of Terror, begins with the U.S. invasion of Iraq in 2003, which resulted in the overthrow of dictator Saddam Hussein, their patron, himself a Sunni Muslim. Saddam and his elite Baathist regime ruled over Iraq for 24 years before he was toppled. Sunnis are a minority in Iraq, but ruled over the majority Shiites for centuries.

Following the overthrow of Saddam, brought to power the Shiite majority in a government backed by the U.S. The immediate disbanding of the Iraqi army, and the purging of Sunnis from the government planted the seeds for the inevitable rise for ISIS.

After the overthrow of Saddam, a guerrilla war broke out by his loyalists against the Shiite government. They were shortly thereafter joined by foreign terrorists, led by Abu Musab al-Zarqawi, founder of al-Qaeda in Iraq. Eventually, Zarqawi and his group were nearly defeated by U.S. and Iraqi forces. This included the death of al-Zarqawi in a U.S. airstrike in 2006.

Then, in 2010 the organization was taken over by Abu Bakr al-Baghdadi. He used to his advantage the uprising in neighboring Syria against dictator Bashar al-Assad, to rebuild the organization and renamed it ISIS.

After, ISIS seized large swaths of territory in Syria, in June 2014. Baghdadi’s forces swept back into his native Iraq, which resulted in ISIS becoming a household name.

Click to purchase this #1 Best Seller in Iraq History, here!

Michael Weiss Michael Weiss is a columnist for Foreign Policy, The Daily Beast, and NOW Lebanon. He is also a fellow at the Institute of Modern Russia where he is the editor-in-chief of The Interpreter, an online news and translation journal covering Russian foreign policy and the ongoing war in Ukraine. He has covered the Syria uprising since its inception in 2011 and reported from the front-lines of Aleppo in 2012 for Foreign Affairs magazine.

Hassan Hassan is an analyst at the Delma Institute, a research centre in Abu Dhabi, and a columnist for The National. His writing has appeared in The Guardian, Foreign Policy, Foreign Affairs, The New York Times, among others. Nottingham University alumnus, MA International Relations. Middle Eastern geopolitics and religion.