Building a Hero I Can Believe In, by Author Samantha Bryant

She stands atop the building, the wind blowing her cape and long, flowing hair out behind her as she scans the horizon. Her perfectly-toned, eternally twenty-three-year-old body is poised to leap (a position that apparently involves torquing your body to accentuate both your breasts and your butt at the same time for the viewing pleasure of anyone who might be watching). She only awaits the call…

That could be a description of many a comic book cover or movie poster.

I’ve always found it funny. Why in the world would a woman who can bend iron in her bare hands or melt through walls dress like that? Surely, with all that power comes some self-confidence and self-respect. I mean, sure, breasts can be wielded like a weapon, but when you’ve got other, more effective and direct weapons, it seems like overkill.

Luckily, this is changing. Like any former all boys’ club, the superhero and comics industry is slow to come around, but change is in the air and it’s exciting. There have always been people trying to write well-rounded female characters in the hero business, but now those characters are going mainstream in a big way.

Sure, Gamora was left off the Guardians of the Galaxy lunchboxes and tee shirts. But she was one of the stars of the movi 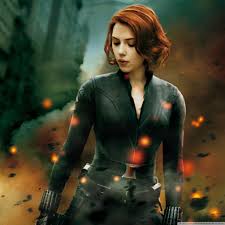 e and held her own on the screen even when she shared it with a giant sentient tree. Black Widow, too, was more than window-dressing in the Avengers movies. Neither of these characters was there in the role of victim, hostage, girlfriend, or comic relief. They were heroes alongside the other heroes. And both of them did it wearing pants and practical shoes more often than not.

It’s an exciting time to be writing in the superhero genre, trying to create characters that speak to grown women.  In Going Through the Change and the rest of my Menopausal Superhero series, I’m writing about women with careers, families, and partners. I wanted heroes that I could connect with; and the older I get, the harder it is to connect with angsty underdressed teenagers. Helen, Patricia, Jessica and Linda are adults, with adult problems and situations in their lives. Of course, they can also throw fire or pianos, transform and fly. That’s the fun part.

Going Through The Change: A Menopausal SuperHero Novel

Going through “the change” isn’t easy on any woman. Mood swings, hot flashes, hormonal imbalances, and itchy skin are par for the course. But for these four seemingly unrelated women, menopause brought changes none of them had ever anticipated–super-heroic changes.

Helen discovers a spark within that reignites her fire. Jessica finds that her mood is lighter, and so is her body. Patricia always had a tough hide, but now even bullets bounce off her. Linda doesn’t have trouble opening the pickle jar anymore…now that she’s a man.

When events throw the women together, they find out that they have more in common than they knew–one person has touched all their lives. The hunt for answers is on.

Samantha Bryant is a middle school Spanish teacher by day and a mom and novelist by night. That makes her a superhero all the time. Her debut novel, Going Through the Change: A Menopausal Superhero Novel is now available for pre-order and will be released by Curiosity Quills on April 23, 2015. You can find her online on her blog,  Twitter, on Facebook, on Amazon, on Goodreads, on the Curiosity Quills page, or on Google+.

9 thoughts on “Guest Post: Building A Hero I Can Believe In, by Author Samantha Bryant”