Way Back Wednesday is a Book Meme created by A Well Read Woman with the aim to write mini book reviews on books read in the past, that left a lasting impression.

Rules for participation can be found by clicking on this button:

I encourage everyone to join in!

This week’s Way Back Wednesday post is dedicated to a required read I had in a college sociology class, titled Nickel And Dimed: On (Not) Getting By in America, by Barbara Ehrenreich. 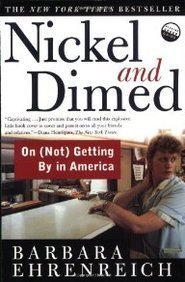 The New York Times bestseller, and one of the most talked about books of the year, Nickel and Dimed has already become a classic of undercover reportage.

Millions of Americans work for poverty-level wages, and one day Barbara Ehrenreich decided to join them. She was inspired in part by the rhetoric surrounding welfare reform, which promised that any job equals a better life. But how can anyone survive, let alone prosper, on $6 to $7 an hour? To find out, Ehrenreich moved from Florida to Maine to Minnesota, taking the cheapest lodgings available and accepting work as a waitress, hotel maid, house cleaner, nursing-home aide, and Wal-Mart salesperson. She soon discovered that even the “lowliest” occupations require exhausting mental and physical efforts. And one job is not enough; you need at least two if you intend to live indoors.

Nickel and Dimed reveals low-wage America in all its tenacity, anxiety, and surprising generosity — a land of Big Boxes, fast food, and a thousand desperate strategies for survival. Instantly acclaimed for its insight, humor, and passion, this book is changing the way America perceives its working poor.

Nickel and Dimed is a book about a woman who crosses the country attempting to live off of minimum wage work. It is a social experiment intended to change people’s thoughts about welfare, food stamps and other government “handouts” in America. Barbara Ehrenreich quickly discovers that not only can you not survive on one minimum wage job, you can hardly survive on two!

This novel is considered a “banned book” due to offensive language. Even my Mother picked it up and said, “What are they teaching you?” -LOL!!

Nickel and Dimed is an eye-opener. I laugh to myself when people have a million negative things to say about people on food stamps, and other government assistance, because the naysayers haven’t a clue. I’m more concerned about the big banks and corporations who are filthy rich, while their employees work a 40 hour week and can barely stay afloat. We should be more concerned with the greed of these corporations, than a working family during an economic recession!

And that is what this book is all about.

I loved this book, and I’m glad it was a required read because it really opened my eyes to what poverty REALLY looks like. It isn’t always the stereotypical ‘man holding a sign looking for money in a parking lot’. In fact, poverty looks like you and me. It doesn’t have a FACE. It can happen to anyone, and being a hard worker isn’t worth diddly squat if your employer only pays you minimum wage.

If societal issues interest you, specifically issues related to the working poor, then give this book a shot! It is worth a read!

Barbara Ehrenreich is the bestselling author of sixteen previous books, including the bestsellers Nickel and Dimed and Bait and Switch. A frequent contributor to Harpers andThe Nation, she has also been a columnist at The New York Times and Time Magazine.