looming on the horizon?

Unflappable, Jen Quintal will divert it. She’s a fixer. Confident and fearless, nothing fazes her and no issue is unsolvable.

When her best friend Felix drops a bombshell and issues her a shocking ultimatum, Jen is rocked to the core. With secrets unveiled and heartbreak on the cards, Jen must strive to put into perspective what is precious and real in her life.

When all you do is solve everybody else’s problems, what happens when you find your own life turned upside down and inside out? What if making the wrong decision means losing your best friend forever?

The third book in the Bounty’s Retreat series.

My Condensed Review on Goodreads. Consider giving it a Vote!

Jen Quintal has her hands full running the Bounty’s Retreat Hotel, while her very pregnant sister Kate, takes some much needed maternity leave. In walks Tyler Wright, the new temporary replacement for Kate, and Jen cannot stop drooling… After all, it has been so long since she has had sex, she worries they may have changed it!

Jen’s best friend, roommate and the hotel’s chef, Felix, has a confession to make. Playing it safe hasn’t worked so far… and to his horror, she thinks he is gay! -Which just isn’t the case.

“I’m sick of being the good guy and waiting for you to open your eyes, Jen.”

Quintal’s Quandary, by Nadine Christian, is a novel about finding love, where you least suspect it. Thrown in is some hotel drama, and a distracting male Adonis who flusters the heck out of Jen. Quintal’s Quandary is a winner! 🙂

I enjoyed the heck outta this book. I love Nadine Christian’s island romances for their humor, in addition to the feel good romance. The heroine, Jen, is a “walking, talking tornado!” She is someone who is easy to love as a character, and I think many women could relate to her.

This novel didn’t have the same suspenseful element that some of her other books have, which I did miss because I’ve come to expect it since I’ve read so many books by Nadine Christian and I appreciate her writing style. However, if you are looking for a romantic, happily ever after, then this book should be in your hands!

***I was given a copy of Quintal’s Quandary by the Author, in exchange for a thoughtful, fair, and honest book review. 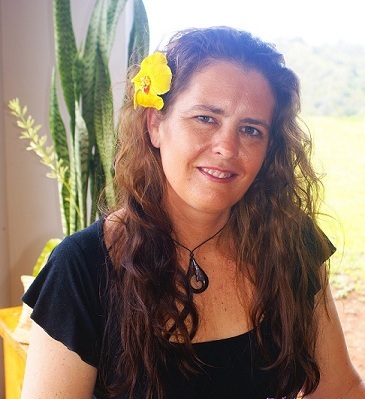 Pitcairn Island, a small isle in the middle of the South Pacific, with her five children, four goats, two cats and thirty chickens. With its rich maritime history, Pitcairn’s romantic past comes alive in her novels, capturing the taste of life on an isolated tropical island, miles from the rush and bustle of normal city life.