In this collection of short stories, enter a world where a young woman paints the future, for a terrible price, and an automaton comes to life; where wizards roam the night, ice pixies invade every Yuletide and a vampire meets Death on a rainy night. He 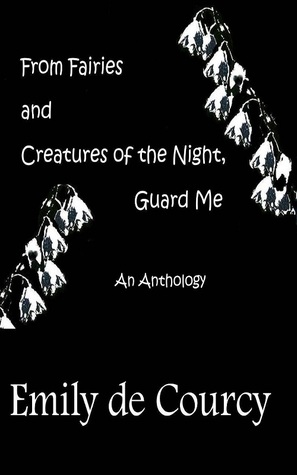 re, a musician plays cards with a fairy king in a game that isn’t really about cards at all, and a king’s long-suffering councillor must figure out a way to deal with a very pesky monster.

Learn the price of immortality and the meaning of loss, and discover the power of love, humour and friendship in these 17 tales of magic and wonder.

Explore the evanescent world of the Hinterlands, where words, wishes and music are so much more than you would ever expect…

From Fairies and Creatures of the Night, Guard Me, is an enchanting book full of short stories, that I enjoyed very much. It includes 17 urban fairy tales that take place in a magical world known as the Hinterlands. Full of magic, romance, friendship, fairies, trolls, and pixies, this book can be enjoyed by anyone who loves good fantasy fiction.

In The Seller of Fortunes, we meet Mestrall who is able to paint the future. Mestrall was good with cats and paint, but not people.

Next story is Impasse, a story about a woman who can transform into different beings. She has a soft spot for sad, broken things. Her oldest friend: a ghost of a king who died in the middle ages.

Then we meet Penny and Erkling, in Something Rich and Strange. Penny is obsessed with finding a magical portal to visit the fairy realms nearby…

In The Bridge, we follow Penny on her travels across a bridge guarded by a troll. Bridge guarding is a sacred and magical task, that trolls take very seriously. As serious as their nails are sharp…

My favorite tale is next, Of Ice Pixies and Wine Casks, and this tale is a story about an infestation of Ice Pixies in the Hinterlands.

Then, there is the tale of Hliff and Maelstrom, a wizard and a witch who meet once a month. Maelstrom brings Hliff a very unusual gift…

Nepenthe continues with Hliff’s story. She enjoys brewing potions, but a certain potion, Nepenthe, comes with a price…

Arachne, my second favorite tale, is about a girl with magical talents who gets herself into some trouble and has to make a devil of a deal… Magriet is the Queen who would never be.

Mrs. Winifred, is a story about an older lady who is plagued by the family curse… and a demonic bird.

Etude, is a story about a woman who prefers messages hidden in music over words. Words, you see, are dangerous, like blades and poison.

Pumpkins is a story about a vampire who develops an unlikely friendship with Thanatos, his would-be prey.

Beowulf, A Prequel, is about Aeschere, a young man who looks forward to winning a vacation so he can get away from his three intolerable friends.

My third favorite tale, The Barely Seen World, is about  a woman created by alchemy and science, who wishes to be “more” human.

Then there is Hildegarde, a respectable Dwarf who is a trained healer in dwarf medicine.

The Song of Rowland is about a brother and sister who love each other dearly, but cannot stand each other’s presence… While hiding from her brother, she (Helen) meets the man of her dreams. A King!

Lastly, we meet Galatea in Pavane, a woman who saves her grief for one day out of the year, every year.

I enjoyed all of the characters very much in these short stories, and was happy to see a lot of them make a reappearance! Overall, this was an enjoyable read, and I would recommend it to anyone who enjoys urban fantasy fiction! I was happy to see that Emily de Courcy made the crossover so well, from writing regency romance (under the name Daphne du Bois) to urban fantasy. She clearly is an excellent writer with a knack for world building, regardless of the genre! 5 stars!

***I received an E-copy of From Fairies and Creatures of the Night, Guard Me, in exchange for a fair, honest, and thoughtful review.

Daphne has always had a passion for literature and history and one day it occurred to her: what better way to use her English Literature degree than to write about Regency romps and romance? She hasn’t looked back since. Admittedly, her addiction to all things Jane Austen from a very young age had probably somewhat informed her choice of subject matter…

Daphne has stacks of notebooks full of stories that still need to be written, which she insists on bringing with her when she moves around the world (she’s done this a lot!). She likes her books full of romance, adventure, witty repartee and a dash of silly humour. When Daphne isn’t writing, she can be found painting, picnicking, reading and listening to all sorts of exciting music.

Daphne also writes fantasy under the pen name Emily de Courcy – her first anthology, ‘From Fairies and Creatures of the Night, Guard Me’, will be out early December 2013.

Also look out for her third Regency romance, His Wayward Duchess, out late Jan 2014!